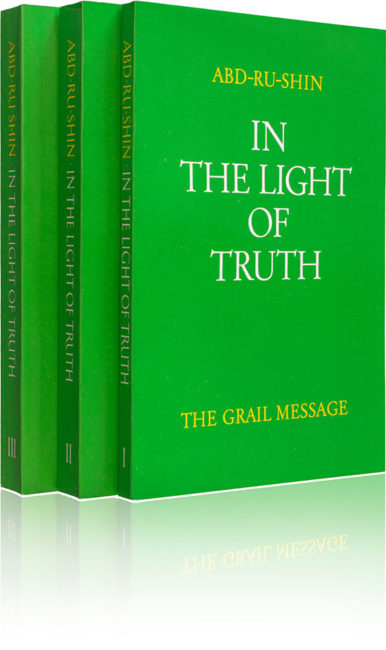 Between 1923 and 1937, Abd-ru-shin wrote 168 essays and lectures, which he assembled to form the book In The Light of Truth: The Grail Message. Since then, the Grail Message has been translated into 19 languages and is available in over 90 countries worldwide. Begin reading online here... Purchase The Grail Message online here... AMONG ALL BOOKS of spiritual content, this work occupies a truly unique place. It can be said that The Grail Message gives an explanation of the World, for it offers a complete survey of everything that exists between God and us human beings. It is the authors declared intention with his work to lead seekers again closer to life, indeed, back to God. Therefore the Grail Message always addresses itself to the individual alone, irrespective of nationality, race, or religion. For the individual alone must bear the responsibility for everything he thinks and does, just as every man "shall reap what he has sown". Out of love, the Grail Message helps the earnest reader to gain personal conviction about his own life's path and purpose, so that peace and happiness may be his. The more the reader uses life itself as his criterion for testing the explanations given in the Grail Message, the more the Truth shines forth from it.

THE AUTHOR WRITES:
"I wish to fill the gaps which have so far always remained unanswered in the souls of men as burning questions, and which never leave any serious thinker in peace, if he honestly seeks the Truth." "In order to convey to mankind such knowledge, which gives them a clear and intelligible conviction of the working of God in His Justice and Love, I have written the work In the Light of Truth."
Grail Message Foundation

The Grail Message Foundation Australia is a registered not-for-profit, charitable organisation, instituted to spread the Knowledge of the Grail Message 'In the Light of Truth' written by Abd-ru-shin. This is done in the hope that people come to understand why they are here on Earth and what their life's purpose is. Beginning in the late 1920's, individuals began to gather together who wished to live their lives according to the principles put forth in the Grail Message. Such activity continues to this day, as devoted readers meet to deepen their understanding of the Grail Message, raise public awareness about the book, and to hold Hours of Worship and Festivals. Non-profit publishing companies have also arisen in countries across the globe, as "In the Light of Truth: The Grail Message" continues to be translated into more and more languages. Today, the "International Grail Movement", supporting the work of the Grail Message Foundation is a collective term for efforts to spread the knowledge of the Grail Message and to realize it in all walks of life. The Grail Movement is also a registered non-profit organization, but also simply an informal association of adherents of the Grail Message around the world. It should be noted that Abd-ru-shin himself neither formed nor formally supported any religious or spiritualist organization, and the Grail Message always and only encourages the reader to cultivate his or her own personal convictions and individual nature. In the words of the author: "The following Word does not bring a new religion, but is intended as the torch to help all serious listeners or readers find the right path, which leads them to the longed-for height." "I do not speak to churches and political parties, to fraternities, sects and societies, but only in all simplicity to man himself."

The Grail Message Foundation is a non-profit institution formed to protect and make known the Work of the Author Abd-ru-shin (1875-1941) - most notably his core title, "In the Light of Truth - The Grail Message". Initiated in 1951 by the widow of the Author, Maria Bernhardt, the Foundation presents a selection of publications all of which, stem from the original philosophy of The Grail Message and, are concerned with the important spiritual goal of acquiring lasting values and insights for a conscious life. Written originally in German, the author's final edition is translated into 18 languages and available in over 90 countries around the world. ABD-RU-SHIN (civil name Oskar Ernst Bernhardt) was born in 1875, in Bischofswerda, Germany. At the outbreak of World War I, Mr. Bernhardt was living in London. On account of his German citizenship, he was imprisoned on the Isle of Man for the duration of the war. The seclusion of internment brought with it an inner deepening, and after returning to his homeland Mr. Bernhardt soon became conscious of his task: to open the path for mankind to a new knowledge of Creation. In 1923, he began writing essays of a spiritual nature under the pen name "Abd-ru-shin", and by 1937, the lectures which constitute the Grail Message were completed. In The Light Of Truth

The three volumes of the work "In the Light of Truth" incorporate altogether 168 lectures that, building progressively upon one anothers contents, give a complete picture of all of Creation. The lectures that are contained in this book arose between 1923 and 1938 and to this day have lost nothing of their validity. They offer an all-encompassing world description on the basis of natural laws, that enables the reader to recognise hidden connections in life, and with this, offer valuable help for self-development.

What Knowledge Will The Seeker Find?

The Laws of Creation are to be found at the heart of the Grail Message explanations. The most important questions of human existence are convincingly answered: Where do we come from? Where do we go to? What is the meaning of our lives and the purpose of our existence? What are the Laws beyond the pysical Laws we know that govern this existence? For the reader of these lectures, a comprehensive overview of all of Creation gradually unfolds.